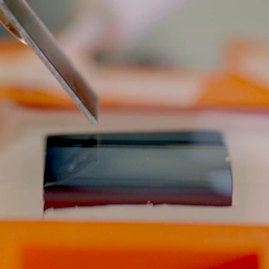 Closeup side view of a lab-made line probe near sample with glued specimen.

We study the use of line probe in microscopy for structured signal. Unlike the conventional use of point probe, by which the scanning probe microscopy takes pointwise samples; each of the line probe measurement is accumulated electric current generated between the contact surface of line shaped probe and sample. The line probe measurements are delocalized and hence more efficient, reducing the scanning time for structured signal by orders of magnitude.

Here, we will study it in the context of a particular microscopy modality known as scanning electrochemical microscopy (SECM). 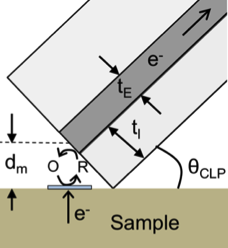 Redox reaction between probe and sample.

The SECM line probe measures the redox reaction between the probe and the electroactive parts of the sample. The line probe consists of a thin conductive layer (dark gray) sandwiched by two insulating layers (light gray). The sensitive area between probe and sample is a thin line of width $t_E$. The distance $d_m$ between the probe and sample is stable by keeping contacting angle $\theta_{\text{CLP}}$ the same though out the scanning procedure.

In a single measurement, a negative potential is applied to the probe end, induces redox reaction near the sensitive part of sample. This produces an influx of negative charge current. 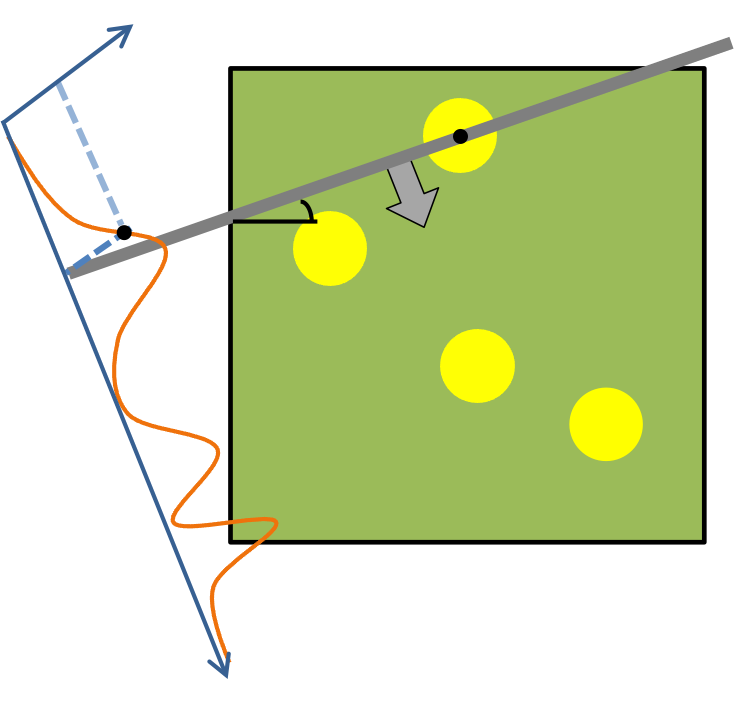 Redox reaction between probe and sample.

The line probe (gray) “sweeps” through the sample (green and yellow) in a predefined direction (arrow). The contact surface between probe and sample constitutes a straight line, from which the line probe measures the integrated electric current as a single measurement.

The line probe takes equispaced steps in its proceeding direction, generates a line scan (orange), as the function from steps distance to electric currents.

The full microscopic scanning procedure is comprised of multiple line scans. After a line scan sweep finishes, the sample is rotated by an assigned angle, then another line scan proceeds; this scanning procedure repeats until required amount of line scan measurements at different angles are obtained.

The final microscopic image is reconstructed via these line scan measurements.

Schematic of scanning microscope with line probe. After the scan angles are assigned, the line probe sweep through the sample as it is rotated at different angle, generates multiple line scans. The final microscopic image is constructed from these line scans via algorithmic approach.

The microscopic line scans as an imaging methodology is closely related to tomography [1].

We begin this study on a dataset with strong structure, in which the samples consist some number of small particles. This is an image modality appears in applications related to microscopy [2], [3]. We assume the image of particles $\mathbf Y = \mathbf D*\mathbf X$ is the convolution of a known particle function $\mathbf D\in L[\mathbb R^2]$ with location with map $\mathbf X$. The $m$-line scans of image $\mathbf Y$ generates lines $\mathbf R$ as

where $\mathcal S$ is the sampling operator, $\mathbf \psi$ is the point spread function (PSF) of a line scan, and $\mathcal L_{\Theta}$ is line projections with respect to angles $\Theta$.

Image reconstruction from line scans under this scenario can be cast as finding the unknown location $\mathbf X$, which is a well understood sparse recovery problem. Due to physical limitation, we only have partial information for PSF $\mathbf \psi$, therefore we solve for $\mathbf X$ while simultaneously calibrate $\mathbf \psi(p)$ with parameters $p$

The algorithm (1) serves as a good cornerstone for the reconstruction method; it is advised to modify (1) accordingly to accommodate several properties of line scans to achieve satisfactory image reconstruction results. 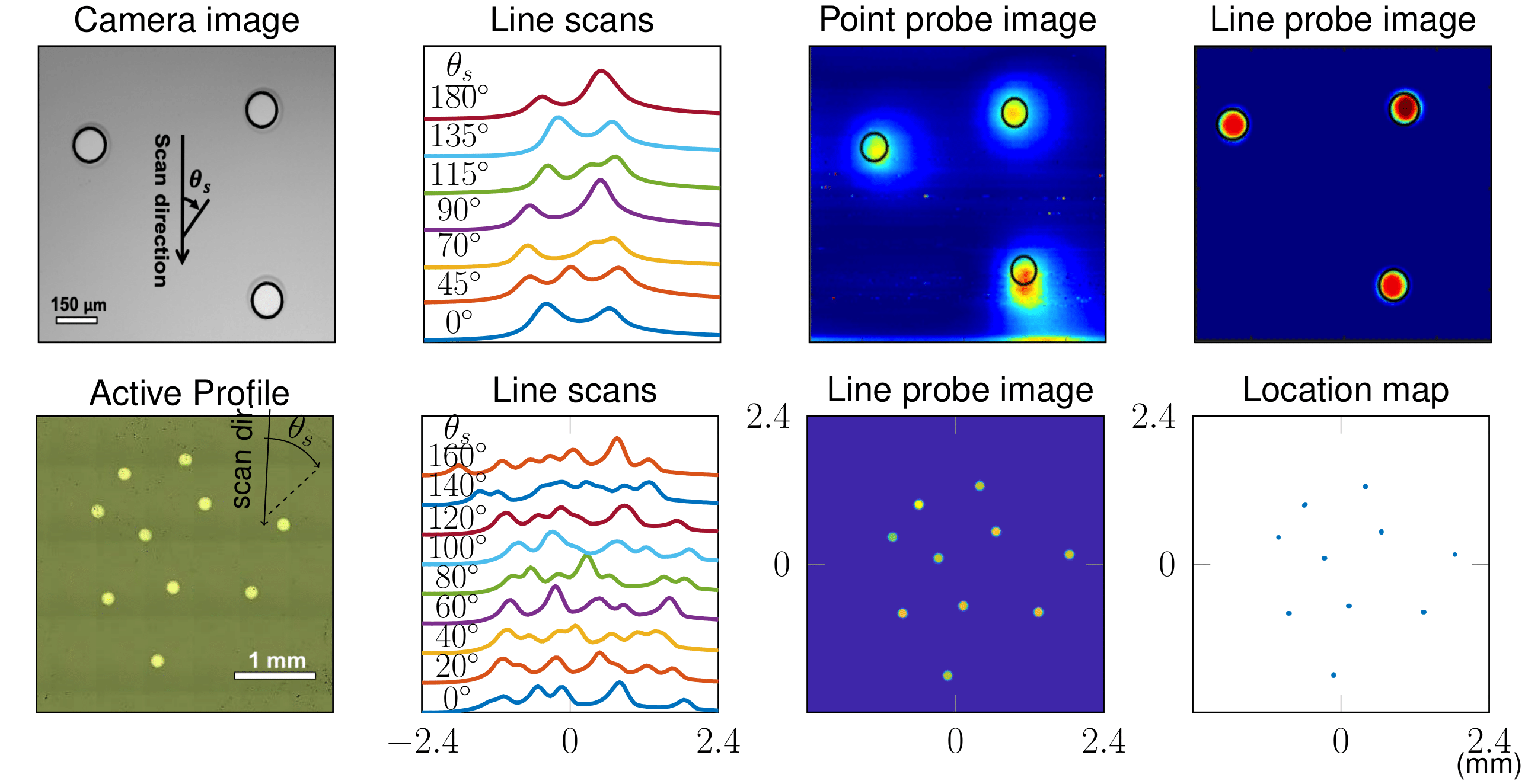 The package for both simulation and real data reconstruction for microscopic line scans (Matlab) can be downloaded via the following github link: